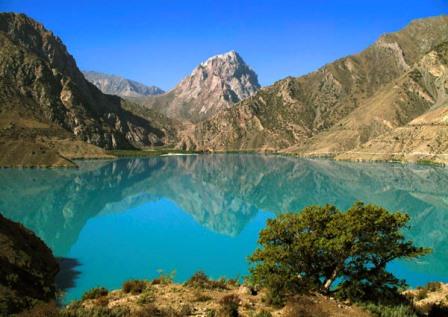 Iskanderkul lake is located between spurs of Hissar range. It is 2.5 km long and 1 km across, being 72 m deep at its deepest, it sits at an altitude of 2,255m above sea level.

Turquoise, calm and surrounded by great ranges of Fann mountains its known far beyond Tajikistan borders. It is one of the most spectacular and picturesque places in Fann mountains. There are almost no aquatic life in the lake due to high concentration of minerals and only small loach survive in such waters.

The lake named after the great military leader and conqueror Alexander The Great who to be said passed the lake on his way to India. Iskander is Persian equivalent for Alexander while kul means lake in many turkic languages.

According to an old legend, 2300 years ago one of the most greatest military leaders and statesman of ancient world – Alexander The Great on his way to India, in 329 AD reached Sogdiana state and conquered its capital Marakandu which was completely ruined. Freedom loving local dwellers did not want to resign and declared a war against Alexander and his army. One night incensed Alexander and iskanderkul lake panorama his army penetrated to the dwellers area, ruined their homes and killed the people. Still unsatisfied Alexander decided to bury even a memory about rebellious dwellers and required to build a dam across the river to flood the area. Sometimes after the river filled the valley and created a lake but even then the dwellers did not give up and continued to pursue Alexander's army. In order to finish with dwellers Alexander requested to destroy an upper part of the dam and huge mass of water fall down the valley sweeping everything on its way, but even then Alexander didn't reach the target.

Another day dwellers driven by a great motion to revenge, attacked Alexander's army. Alexander galloped around on his warhorse Bucephalus bearing up his warriors but dwellers came closer and closer, so close that Alexander found himself on the edge of the cliff, the horse stumbled and both Alexander and Bucephalus faked down into the lake recently created by Alexander's request.

Alexander survived but the horse sank. In grief Alexander left the area towards India where he called one of the cities founded by him in 326 AD by the name of his warhorse - Bucephalus. This days the city is located on the territory of Pakistan and known as Djalalapur.

Alexander passed away many years ago, but according to local belief, during summer clear nights, exactly at midnight, Bucephalus comes out of lake and graze on the shores, then plays around the water and disappear in lake again. Locals believe if a single girl see Bucephalus, happy marriage and a long life awaits her soon.

On the shore of the lake is a tourist base with a few chalets - a king of camping site with "stone book" - a huge rock with the names of the visitors scratched on surface. The stone is speckled with hundreds of names and dates, and there are a few historically important saying: "Russians.1870.VI", in memory of Russian Expedition with Fedchenko - a great Explorer of Pamirs and Central Asia.

Not far from the lake Iskanderdaria river creates a 38 metres waterfall, known with locals as "Niagara".

There is an observation deck above where visitors may spend time watching the water falling.

Near here is an old Archa or juniper tree with thousand of ribbons, pieces of fabrics and even cloth labels tighten over.

Visitors tight the ribbon and make wish which will of course come true another day.

Do You Have any Questions?